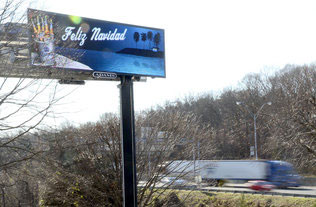 A new scientific method to estimate how many eyeballs fall on roadside billboards was presented Thursday to about 200 advertising professionals in Charlotte.

Joseph Philport told members of the American Advertising Federation/Charlotte, formerly the Charlotte Ad Club, that the outdoor advertising industry is being fundamentally changed by the new metrics, which for the first time can deliver demographic information about the effectiveness of billboards.

Philport is president of the New York-based Traffic Audit Bureau for Media Measurement, a not-for-profit organization serving advertisers, ad agencies and the outdoor media industry. He said one of his first jobs in the business was sitting beside a billboard 30 years ago with a clicker, counting the number of cars that drove past.

“We haven’t had metrics comparable to other media,” he said. Advertisers knew billboards worked to some extent, but they were difficult to integrate into ad campaigns. Competing industries – including print, radio and TV – had sophisticated measurements of their audiences. But when it came to billboards, ad buyers couldn’t be sure who was seeing the messages.

Under the new “Eyes On” program, daily traffic counts, demographic information about people driving by and eye-track studies are combined to provide potential ad buyers audience information similar to Nielsen ratings. Demographic information can be estimated for age, income, gender, race and ethnicity for billboard locations, he said.

Eye-track movements were studied in a laboratory setting that simulated the driving experience on a big screen – billboards to brake lights were projected and people’s responses were analyzed. This resulted in an effectiveness rating for billboards based on size, angle to road and proximity to traffic that is part of the audience calculation.

Philport said that the laboratory study established a baseline for looking at billboards, but did not take into account the drawing power of a good image. “Good creative brings more eyeballs,” he said.

Eyes On was introduced in 2010 and is rolling out nationally.

Ron Kaufman, executive vice president of Charlotte-based Media Power Advertising, said he has used the program for national clients in other markets like Philadelphia to map campaigns and likes the better it provides for estimating cost-per-thousand impressions.