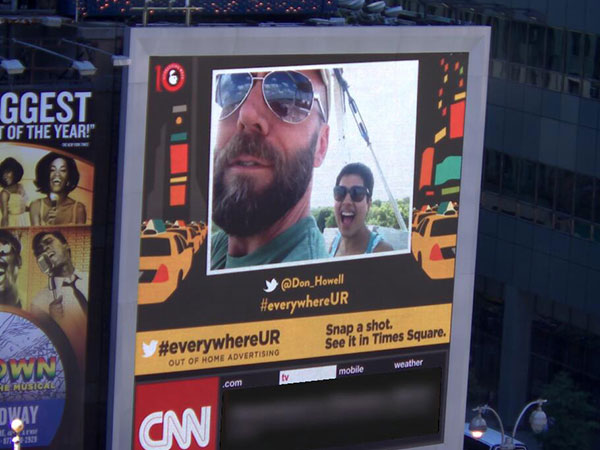 As part of the annual Advertising Week held in New York from September 23 – 27, OAAA members have launched a campaign to highlight the effectiveness of OOH and its influential relationship to social media.

Billboards across the country are proving to the American public that OOH advertising is “EverywhereUR.”

The campaign allows Americans everywhere to have their personal photos featured on a digital billboard in Times Square and then captured for posterity.

Through September 27, the public is urged to snap a photo and tweet it using the hashtag#everywhereUR. The photos will be filtered by the hashtag and have a chance to appear on a digital billboard in Times Square. The images will be captured by cameras and sent back to the sender’s Twitter account, giving them a keepsake of their personal image on a Times Square billboard.

Be sure to inform friends, family, colleagues, and clients about this fun opportunity to see themselves on a digital billboard in Times Square.