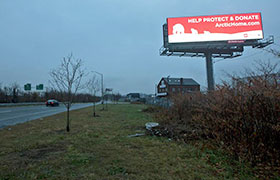 The new state-approved regulations authorizing the billboards go into effect Dec. 7. They follow a three-year pilot program that tested the digital signs in selected areas and showed that electronic billboards created no safety hazards for motorists, said Sara Lavoie, a spokeswoman for the state Department of Transportation.

While opponents fear a proliferation of garish and distracting displays, Lavoie said that the department is following about 40 other states in embracing the technology, and that the signs have been “very beneficial” for promoting public service announcements.

The billboards will also promote commercial products and services. The regulations bar the use of flashing lights or moving video in the display.

Permits for electronic billboards that stand alone, not at the site of businesses they advertise, will be subject to approval from affected communities as well as the state.

While the application fee for a new permit will be $1,000, “we’re not looking at this as a revenue generator in any way,” Lavoie said.

Stephen Ross, president of the Boston division of Clear Channel Outdoor, the largest owner of billboard panels in the state, welcomed the new regulations, saying the rules will help the state economy.

“We also believe this is a positive first step to modernize the state’s outdoor advertising industry in order to help Massachusetts businesses better sell their products and services,” Ross said in a statement. “We are committed to working with local communities to ensure this modernization respects the urban landscape of Boston and the entire state.”

But not everyone is on board. Somerville Mayor Joseph Curtatone said that he has been working for 18 months to hammer out a deal with Clear Channel to reduce the number of billboards in Somerville by moving them out of neighborhoods and placing some on main thoroughfares such as the Interstate 93 corridor.

Former governor Michael Dukakis, a longtime critic of billboards, spoke out against the proposed rule changes during a public hearing on the matter in June. He noted that he and his wife, Kitty, live part-time in Los Angeles, which he said is flooded with electronic signs.

“And it’s awful,” Dukakis said at the time, according to a transcript of his remarks. “It’s terrible. A city that ought to be one of our best-looking cities in America is just plagued with these things. . . . And for the life of me, frankly, I don’t know why the Commonwealth should have to put up with the same thing.”

Mayor William A. Flanagan of Fall River said Tuesday that having one of the signs along Interstate 195 has helped the city, and that he would support additional billboards.

He said his city’s electronic sign has helped local businesses seeking a “cost-effective” way to advertise, and the city has also used it put out public service announcements and promote local festivals.

“I find them to be aesthetically pleasing,” Flanagan said of electronic billboards. “There’s so much you can do with them. I like it because it helps light up an area, too.”

He said the city does not get a percentage of the advertising revenue but does collect property taxes on the billboard.

“Chicopee has several municipal properties adjacent to highways that have been leased for revenue from billboard installations,” he said in an e-mail. “We will continue to seek competitive bids for these locations as contracts expire, and I expect to see more proposals for electronic boards during the next bidding cycle.”

Apart from the pilot state program, some organizations have placed electronic displays on their premises, including WGBH studios in Brighton. It has what it calls a 30-foot-by-45-foot “digital mural” on the side of its building facing the highway that is “designed to brighten the ride for commuters” with one thought-provoking image each day, according to its website.

Lavoie said the state does not track the number of “on-site” electronic signs in the state, because those permissions are granted by local communities.

“Our new electric billboard regulations focus on off-premise, stand alone advertising,” Lavoie said, adding that new permits could be issued for thoroughfares such as Interstate 93 and the Massachusetts Turnpike, provided that affected communities approve.

According to a copy of the new regulations posted on the website of the state Office of Outdoor Advertising, a wing of the Transportation Department’s Highway Division, displays on electronic signs must remain static for at least 10 seconds.

In addition to flashing lights and videos, audio is also banned under the new regulations. The electronic billboards will be required to display public service announcements for at least 15 hours every month.

There is no set cap on the number of permits that can be granted, Lavoie said. The Transportation Department has not decided when it will begin accepting applications.

Richard Davey, the secretary of the transportation department, did not have to formally sign off on the rule changes, according to Lavoie. She said he was not available for comment on Tuesday.

“He has been fully briefed throughout the public process and is aware and approves of the final regulations that have been filed,” she said. “He believes these regulations strike a balance among the many comments that have poured in from stakeholders over the last few months.”