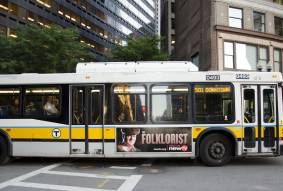 Bus advertising provides outstanding street-level impressions to a metropolitan and suburban audience. Buses go where people go and can always find a crowd.  Whether it’s an entire bus wrap, an exterior side or an interior display, your company will grab attention with a truly moving message.

Advertising placed on the exterior of a bus is a circulating billboard. Your ad will be viewed repeatedly by commuters traveling the same route daily or multiple times weekly.

Interior Bus Advertising reaches a “captured” audience.  Interior ads are viewed over a prolonged period of time as commuters travel to their daily destinations.  Ads can potentially be viewed for over an hour at a time depending on the length of a traveler’s ride.  Interior bus cards are positioned in frames above passenger seats.  Longer viewing time allows for more copy than standard posters and regular riders mean high frequency.

By utilizing bus advertising your ad will be seen by thousands of pedestrians and drivers as the buses move continually around the market displaying your message to the masses. Buses provide targeted routes as they slowly cruise city and suburban streets.  The ads are produced on digitally or screen-printed transit vinyl and are available in four-week periods to long-term programs.

Queen bus displays are an exterior mobile display that often appears on the curb-side of the bus. Queen bus displays are seen under the rider’s windows and between the tire wells. This mobile media signage is smaller than the average king bus display, but still makes a bold statement with its repeat exposure as the bus travels its planned route throughout your desired market. This form of transit advertising is used to reach pedestrians and vehicular traffic in metro areas. Queen bus displays are typically 30″ h x 108″ w & 30″ h x 88″ w, but exact specs may change per market.

King bus displays are an exterior display that may appear on either side of a bus, often below the rider’s windows and between the tire wells. King bus displays are used to reach pedestrians and vehicular traffic in metro areas. Mobile ads often acquire mass audience exposure as buses travel planned routes throughout desired markets. Transit advertising tends to have high frequency, which develops from repeated exposures as buses follow the same route daily. This form of mobile advertising generates high reach, frequency and impressions by covering a large geographic and demographic spread. Transit advertisements eclipse other media by traveling through the most densely populated areas. King bus displays are a signature transit product requested by many advertisers. King bus advertising displays are typically 30″ h x 144″ w, but exact specs may change per market.

Tail bus displays are an exterior mobile display located on the rear of the bus usually under the window. Tail bus displays are also referred to as taillight panels. This mobile media type commands the attention of passersby, as they are located at eye level. This form of transit advertising is used to reach pedestrians and vehicular traffic in metro areas.  Tail bus ads are typically 21″ h x 72″ w, but exact specs may change per market.

Full Bus Wraps draw the eye by taking center stage in the middle of the bus; this mobile media type appears on the exterior of a bus between the tire wells and takes the height of the bus itself, by covering it from top to bottom. This form of transit advertising is extremely impactful with endless creative possibilities. Full bus wraps reach both pedestrians and vehicular traffic in metro areas. It’s placement over the windows and its immense size, translates to higher recognition and ad recall. Full bus wraps, as well as half-wrap bus, and half-back bus wraps are available in many major markets.

Half back bus advertising is an exterior display, appearing on the back of the bus. This form of transit advertising covers from tail light to tail light and halfway up the back of the bus. Half Back bus ads offer the same benefits as full back bus ads without window coverage. This mobile media type is used to reach pedestrians and vehicular traffic in metro areas. Like tail bus displays, and full back bus ads, cars in traffic behind the bus have prolonged exposure to this ad. This mobile ad is available in most markets with public transportation systems.

Full back bus ads are high impact wraps covering the entire backside of a bus. This is a popular and widely available specialty transit product. By covering the bus from bumper to roof this large mobile media ad showcases your brand in a way no pedestrian or motorist can miss. This transit ad is used to reach pedestrians and vehicular traffic in metro areas. Full back bus ads leave a lasting impression on motorists, pedestrians and other commuters as it travels routes throughout your target market. Full back bus ads are available in most of the top 100 US markets.

Interior bus cards are positioned in frames above passenger seats. Some markets offer backlit panels. In some systems, a single advertiser can purchase all of the cards on a vehicle to create a ‘branded bus’. Bus Interior advertising is used to reach bus riders. Longer viewing time allows for more copy than standard posters and regular riders mean high frequency. Interior bus cards are typically 11″ h x 28″ w, but exact specs may change per market.

If you are interested in learning more about any Interior or Exterior Bus Advertising options, please contact us today – 866-6-HUGE ADS 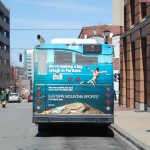 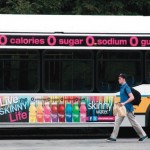 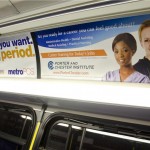 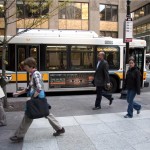 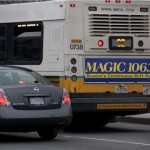 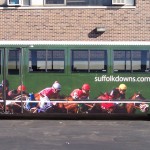 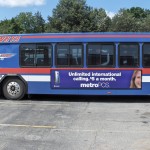 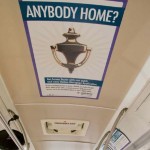 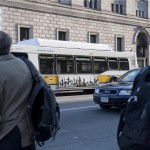